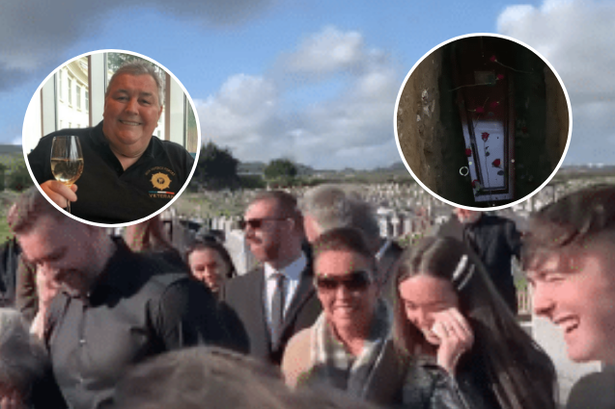 As bagpipes finish their somber wail, a casket lowers six feet into the ground in silence. And then…

“Let me out! It’s fucking dark in here!”

In other less evolved countries, this humor may have missed the mark. Fortunately, Mr. Bradley was an Irishman, so the timing was perfect.

Andrea Bradley, one of Shay’s three kids, said her brother Jonathan conspired with their father nearly a year in advance to pull off the gag. When the bagpipes sounded, Jonathan queued the recording of Shay and gathered his siblings, mom, nieces and nephews to listen.

“So my oldest brother called over to the house for tea one day. They were having fun and joking and my dad just said ‘put the phone on the table and start recording.’” Apparently Shay did it in one take because he was just naturally that funny.

“Dad made Jonathan promise not to show any of us until days before the funeral. He specified, ‘Tell mom, but tell her she’s not allowed to stop it.’”

The message played from a speaker near his grave — not from inside the casket itself.

While everyone quickly caught on during the gaffe, Shay’s sister Rose apparently thought the shrieking was legitimate.

“She’s shocked, she thinks the message is real. Then, the penny drops and she’s like ‘It’s a good thing he’s dead because I’d have killed him’. That reaction would have pleased him the most,” Andrea said.

“He wanted to make sure my mom would be laughing leaving the cemetery, not crying,” said Andrea Bradley, adding that her parents were married for 43 years.

She said her father’s recording was a way of “saying not only goodbye but to also say, ‘Ok, the sadness is over now — here is a laugh so you can go and celebrate my life with a smile on your face.'”

Shay, an Irish Defence Forces Veteran, battled cancer for three years, but made sure to leave his family one last laugh, one last warm memory before being buried.

“My uncle spoke to the priest afterwards, the priest just said he has done many funerals but has never seen anything like it.”

We salute you, Mr. Shay Bradley, for orchestrating a Real Farewell of Genius.